How to Make Fresh Whipped Cream (The Real Deal)

Okay - and I know this is going to sound weird - but I like whipping cream.  I mean, I like the process of whipping liquid, heavy cream into the stuff you put on ice cream and cobbler and pie and brownie sundaes and chewy chocolate cake, and sometimes jello.  If you eat jello.  That's what I'm talking about.  Why don't I just get the stuff in the can that squirts out like piped frosting?  Don't get me started.  And don't get me wrong, either; there is a time and a place for the whipped cream in a can, just as there is a time and a place for cool whip in the plastic container.  I ate that stuff on jello salads many times as a kid, and I'd do it again.  But there's nothing you can tell me that will convince me that there's any real substitute for freshly whipped cream, like the stuff on this strawberry shortcake below.
I think the thing that really put fresh whipped cream on the map for me was when Herrell's was still selling ice cream in Harvard Square and I was eating hot fudge sundaes for dinner on a regular basis one summer a few years ago.  I still haven't had any hot fudge that has the same addictive quality as Herrell's hot fudge, and I'm losing hope that I ever will now that Herrell's in Harvard Square is no longer.  But the whipped cream!  Those kids behind the ice cream counter would spoon whipped cream onto the sundae straight out of a bowl.  And it was delicious!

For a while I had no idea why it was so good.  I don't think I had ever really had fresh whipped cream before, sad as that sounds ... and it sounds sad because it *was* sad - very, very sad.


Thankfully, at some point I wrapped my mind around the concept that the whipped cream I'd eaten before had, at some point, been the liquid cream you see in the photos here ... or at the very least had been some substance trying to approximate cream, and had been processed and packed into the can or container I'd purchased it in.  And I also wrapped my mind around the fact that I could be the person to take the cream from its liquid state into the whipped state required for brownies and cakes and ice cream and all that other stuff.  It also turns out it's quite easy, especially provided one has an electric mixer of some sort on hand.

The first time I tried whipping cream I don't think I really knew what would happen.  But, it turns out it's really, really easy ... and really, really delicious.  And I never buy processed whipped cream anymore.  Here's how it goes: 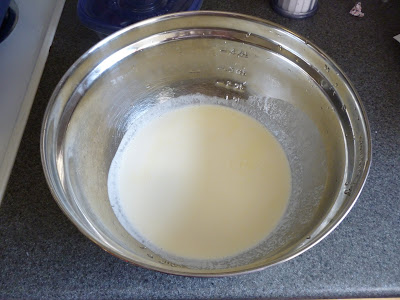 Put the liquid cream in a tall metal bowl.  Best if you've put the bowl in the freezer for 5-10 minutes beforehand so it's chilled and keeps the cream cold as you whip it.  Some people also like to pop the beaters in the freezer for a few minutes along with the bowl.  I almost never remember to do that, but maybe you'll be more with it than I am.  Either way, the whipped cream can turn out just fine. 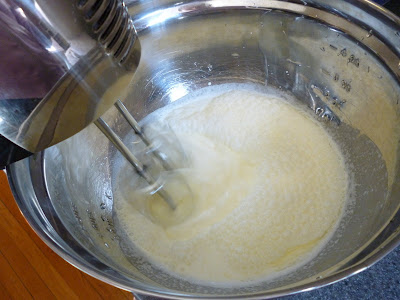 Start your mixer .... go!  I don't think it matters much what setting it's on; my very basic hand mixer seems to just have multiple settings of "high," so I usually have it on a medium setting, but if you have a more sophisticated mixer it may actually have a "whip" setting.  You just want it to be whipping fast enough that you see those bubbles popping up pretty quickly.  (Those bubbles are the air getting whipped into the cream, which is what makes it light and fluffy ... hence, the term whipped cream ... Just thought I'd point that out). 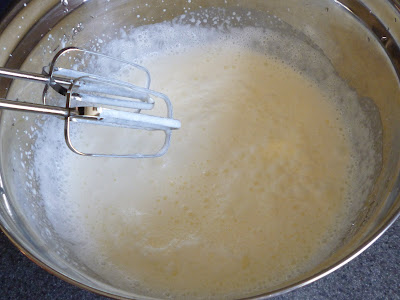 Now, see how the cream is starting to fill up more volume in the bowl?  (That's the air fluffing up the liquid cream again!)  And the cream is sticking to the sides of the bowl a little, rather than sliding down like a regular liquid does?  This means things are going well.  This is about 1-2 minutes into the whipping process.  I add the sugar at this point.  You could add it a bit sooner or later; I just like to thicken the cream before adding anything to it. 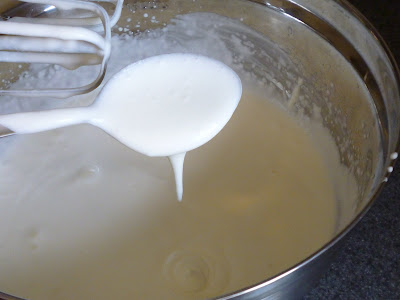 And now see how the formerly-liquid cream is now not so liquid anymore, and is thick and slow enough that I can capture it with my little point-and-shoot camera?  Again, things are moving along just as they should be.

Incidentally, while your work is much easier if you use an electric mixer for this, it is possible to whip cream by hand.  A friend of mine did this a while ago and it turned out great ... just a bit more a labor of love, I suppose.  Whether for the people you're cooking for, or just for the whipped cream itself. 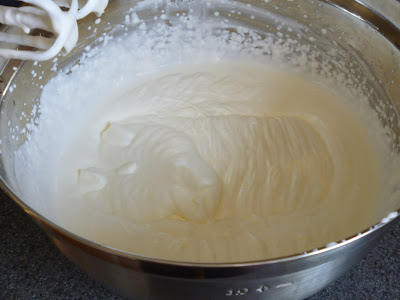 Now here's where you know you're almost done.  The cream has started to form what can be called "ribbons," as you would say if you were whipping egg whites for flourless chocolate cake, or meringue, or what-have-you.  It's still a little runny, though, so we whip it just a teensy bit longer ... 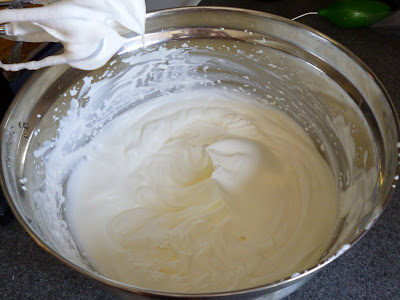 And, aha!  Finished.  The cream is thick enough that it can form that peak you see in the middle of the bowl (and the small ones you see on the beaters).  But it's not whipped so much that it's turned into butter (that can happen if you kept going for a while longer).  This part is kind of matter of taste; I think I make whipped cream that's a little more to the liquid-y side (how it is in the strawberry shortcake photo above) but others might like it a little thicker.  If that's the case, just beat it a little longer and stop whenever the consistency is to your liking.


There are so many things to discuss after this.  Like, would it be a good idea to add fresh mint to this cream?  (See this post on blueberry pie and mint cream).  Or to add cinnamon?  Or amaretto?  Or even to add some ginger?  And if so, should it be fresh or candied?  Depends on what you're making, of course.  But that will be another topic for another time.

Posted by Madeleine at 7:22 PM

Labels: how to, whipped cream