I am such a huge fan of quiche.  It was on the regular menu in my house when I was a kid; maybe that's where it started.  And then in college, one of my favorite spots was a little restaurant in Hyde Park, somewhere around 53rd St. and E. Hyde Park Blvd. (does anyone remember the name of this place?  I think it was within a few doors of Mellow Yellow), where you could get quiche as a meal, with fresh fruit on the side.  Now as a grad student in Cambridge the delicious quiche at Crema Cafe has powered many a morning (or afternoon) of work, when I pick up a piece to go on my way to my office.

Although as far as doing actual baking goes, my gateway baked good was apple pie, after I got so absorbed with that I started thinking about what else would require pastry to cook ... and ta-da, quiche was back on the menu.

The quiche here is recipe that came to me the day after I arrived to my parents' place in Virginia this past year to celebrate Christmas.  At first I thought thyme was the right herb for it, but the thyme was a little too piquant for my taste, and on a second run-through the sage was a much better complement to the sweet potatoes.  The red onion gives the the custard a little extra kick, and the mix of cheeses adds great flavor.  Don't get too stressed out if you end up just doing two cheeses, or even just using the goat cheese ... I realize three cheeses may seem a little fussy ... even if it is really good.  If you opt for using just one or two cheeses, I would just use a bit more of it so that the volume of cheese you're using is about the same as what's called for in the recipe. 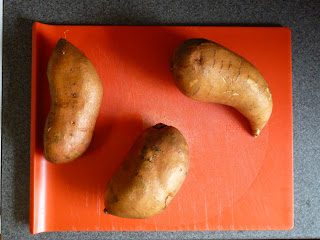 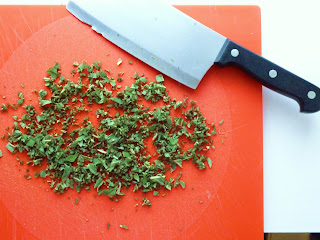 1.  Pre-bake a pie/quiche crust (see the post on this for instructions).  Set aside to cool as you finish preparing the quiche filling.

4. Add the olive oil to the sweet potato mixture, and toss until the vegetables are covered with the oil and all ingredients are mixed together.

5. Spread the mixture in a pan and broil in the oven for about 20 minutes, mixing the mixture as the edges on top begin to brown.  You'll need to keep an eye on this dish to do this.  The idea is that you want the edges of the potatoes to be browned, but not burned.  This adds to the flavor and appearance of the quiche.

6.  As the sweet potatoes broil, grate the havarti and cheddar, and set aside.  Mix the two cheeses together, using your hands or a fork or spoon.

7.  Whisk up the custard mixture in a medium-sized bowl.

Posted by Madeleine at 1:35 PM