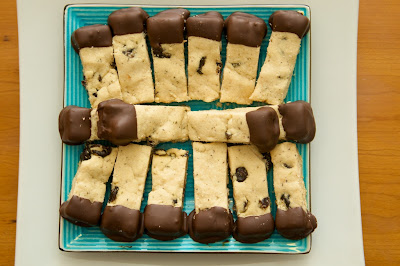 Mmmm, shortbread.  For some reason I really had the urge to make a pan of shortbread some time in early December, although I'd never made it before that point.  The thing about shortbread is that it's really very simple to make, but it does take about an hour, sometimes a bit more, to bake, so it can be a little time-consuming.  But there's something about the simplicity of it, like the ornamentation of dipping the cookie in chocolate, that I find appealing and kind of beautiful.  So I've made it a few times since then.  In this case I also added dried sour cherries and lavender.  I love the combination of textures, colors and flavors in this cookie: the classic combination of chocolate and cherry, the fragrance of the lavender overlaying the piquant fruitiness of the cherry, the chewy cherry pieces in the crispy cookie and hard chocolate, the tiny flecks of lavender across the golden shortbread, the delicate flavor the lavender brings to an otherwise fairly dense dessert.

I made the shortbread pictured above for the Christmas dinner with the neighborhood group, where we also ate the barley leek soup with dill and parmesan.

The Cherries
I started out with Martha Stewart's recipe for basic shortbread.  I added about half a cup of dried sour cherries (delicious!), which I chopped up roughly using a large knife.  I wanted the cherry pieces to be small enough that they would be scattered throughout each cookie and wouldn't make the cookies too difficult to slice, but large enough that there would be a clear burst of flavor when biting into one, and also large enough that they visibly looked like cherries and not just colorful flecks when you see them displayed.  I think this visual aspect is really important.

Aunt Sylvie's Garden: Lavender in the Cookie
Then I had an inspiration - with some trepidation, to be sure - to add some lavender to this mix.  Burdick's Chocolatier on Brattle St. makes really delightful French macarons with lavender, and that's probably one taste and color I had in my head while mixing this shortbread.  I had a little bag of lavender buds from my Aunt Sylvie's garden in Seattle, which she gave me to bake with when I visited last February.  I minced the lavender buds, about as finely as I could.  Then I sifted them to get rid of the chaff of the bud, leaving just tiny pieces of fragrant lavender.  To be honest, I'm not sure exactly how much I put in because I mixed it until it looked right to me, which was when I could clearly see the flecks of lavender in the dough but hoping I hadn't put in so much that the taste would be overwhelming and people would feel like they were eating flowers when they bit into a cookie.  I think it was about 2 tablespoons of the sifted lavender.

I forgot to do this this time, but if I baked this cookie again I would poke two sets of holes in the top of each cookie using a fork, for added ornamentation. 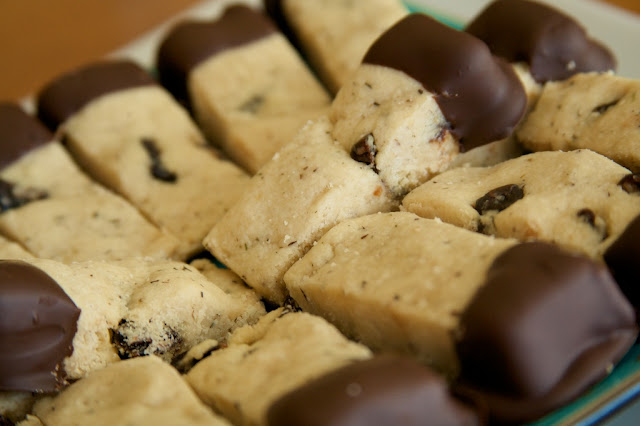 Chocolate-Dipping
I melted a bar of Cadbury's dark chocolate in a bowl, which I bought across the street at the Harvard Square CVS, and used that to dip each cookie.  I placed a sheet of wax paper on a cookie sheet and set the chocolate-dipped cookies on it, then put the full sheet in the refrigerator for about 30 minutes so the chocolate could firm up.  It's got to be a little bizarre how satisfying I find this step to be, seeing the chocolate become smooth and firm, the finishing touch on this dessert.

The Results
Truly, when I first tasted one of these cookies, I was afraid I'd put a bit too much lavender in - the scent was pretty strong and I think it jolted me a bit at first.  But then every last cookie was gone by the time my guests left.  There is a certain unusual-ness, an unexpected delicateness, about this cookie that may catch you off-guard at first, but I think overall the combination is a winner and I plan to make these again before too long.

A note on sugar and cookie texture:
When I've made this recipe before I used brown sugar for half the sugar called for, just because I like the taste of brown sugar ... and maybe also because I like to change it up ... but I noticed that in the batch pictured, which I made with just white sugar, the dough consistency was drier and the cookie itself was crispier.  In the batches made with brown sugar, the dough was more moist, and the cookie was a bit softer.  I realized that's probably because of the molasses in brown sugar, which added moisture to the dough - I didn't think about that when I substituted it.  So when I make this recipe again, I'll probably use brown sugar but may try adding just a bit more flour to offset the moisture and see how that turns out.  The softer cookie was actually nice, too, though - I guess it just depends on your preference.
Posted by Madeleine at 7:44 PM