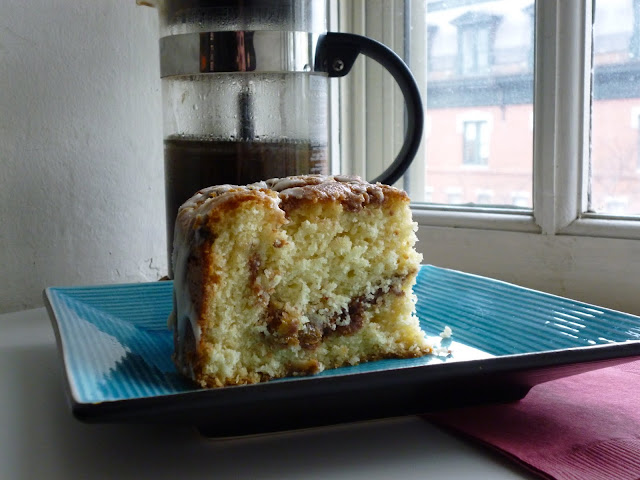 I now interrupt this succession of posts about cupcakes to write about a cake that's kind of special to me, the cinnamon streusel Easter cake you see in the photo above.

When I was a teenager, my family lived in Russia for several years.  Around Easter-time (according to the Russian Orthodox calendar), any store around that sold food would be selling traditional Easter cakes called kulich.  They taste like something between a bread and a cake; a little bit sweet because they generally have raisins or other dried fruit in them, but not overly so.  My sister tells me she remembers the first time we bought one, at a kiosk we passed one Sunday on our way home from church (Christian, but not Orthodox).  The cakes are baked in tall cylindrical pans (resembling a coffee can), so as the top rounds as it bakes the shape is reminiscent of the round domes on top of many Russian Orthodox churches.  The blog Bluestocking has some great descriptions and photos of the cakes and the process of making one.


I don't think I'd thought about these cakes for years, but last Easter I had lots of memories of them - seeing them in stores in the neighborhood I lived in as a teenager, eating toasted, buttered slices for breakfast - and so I baked a cake that reminded me of them.  The one here is a much sweeter cake than the ones I ate in Russia as a kid, but it's round and a little bit tall like the traditional ones, and has the sweetness of spices and raisins in it, just like the ones I remember.  While I wasn't successful in doing it with this cake, the traditional cakes have the letters "XB" stamped on the side or top of the cake.  It stands for "Christ is Risen" (in Russian: xристос воскрес), in English the equivalent of writing "CR" on the cake.  I tried to make the letters with raisins and the frosting, but alas, the glaze wasn't quite thick enough to make the raisins stick (next year!).  Anyhow, here's the recipe, adapted from Ina Garten's Sour Cream Coffee Cake:
Ingredients for the cake: 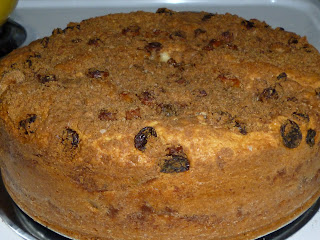 Ingredients for the streusel: 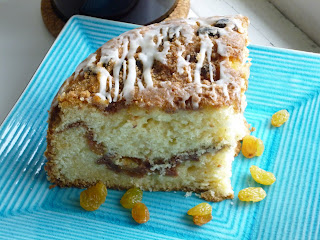 Ingredients for the glaze:
Directions:
I've still got one more cupcake variation to post about; that'll be on here soon, too.