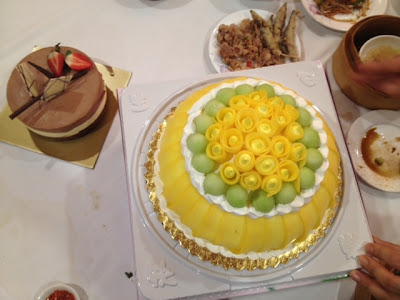 I got to eat a slice (well ... perhaps 2) of this mango cake when I was at a friend's birthday party a few weeks ago ... and just had to share.  This thing was gorgeous!  It was a very light yellow layer cake with a whipped white frosting, pretty close to whipped cream.  The whole cake, however, was covered with these thin slices of fresh mango all around, creating that dome effect.  And those blossoms on the top?  Well, they are actually the same thin slices of mango wrapped into those circles/cylindrical shapes, with little blobs of colored whipped frosting in the middle.  Pretty fantastic, right?  We were in Chinatown eating dim sum for this event, and the cake came from a Chinese bakery in that area.  I wish I could remember which one.

I now have it on good authority that a different friend is planning to make a birthday cake involving fresh mango and lime ... very much looking forward to seeing how it turns out next week!
Posted by Madeleine at 2:35 PM 90 comments: 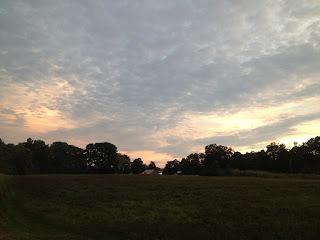 The sun was setting down the street about a week ago,

... well, it was actually setting everywhere in the area, more or less, but it only looked like this down at the end of our street. 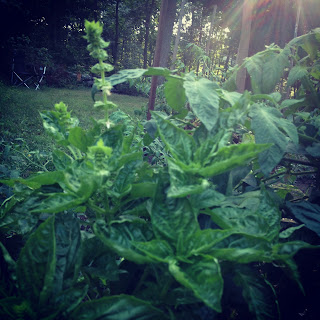 And I made a favorite summer pasta by dicing up some of the amazingly-red-inside-and-out tomatoes that came from the farm down the road,


And picking some basil from the basil plants in the garden outside, and mincing that up, too,


And cutting 8 ounces of mozzarella into small chunks, and adding all all once to the warm pasta just cooked, so the mozzarella got kinda melty.

And then I grated some romano on top, and ground a little pepper, too,

And then tossed some baby spinach with a vinaigrette made from olive oil, white balsamic, and dijon mustard. 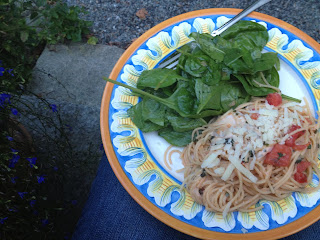 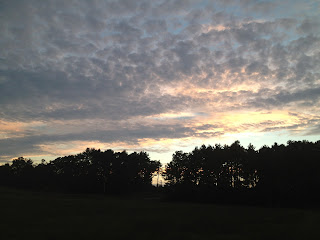 And we ate it all sitting on the side porch steps, and sat there until the sun had mostly gone.

And also until the bugs got very buggy.


But by that time we had finished up the pasta, anyway.

Kitchen in the Yard ... now in Berlin 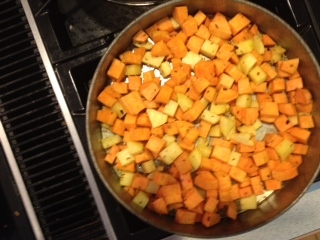 Yep, I'm still cooking in a kitchen with a yard nearby, but rather than The Yard, now it's a kitchen in the lovely home of my friends out in the country. And the yard is now a quiet, sprawling one with peas and green beans growing in rows, and fresh mint and basil growing beside the doorway. And as I sit here, I hear the rustle of leaves outside the window as a welcome breeze blows through them on this hot day. And there's not even a murmur of traffic, as far as I can hear.

How fabulous is that?

I want to write more about this new yard - literally, because it's gorgeous, and also figuratively in the sense of, this is where I am now! But for now I want to share one of the things I've made since I've been here, which I'm pumped about: curried sweet potatoes.

We ate these hot and crispy with some pan-cooked chicken last week, and I ate them cold the next day for lunch, sort of in the vein of a prepared salad, and they were delicious then, too. So I made some again today. Here they are!   Albeit a little bit blurry. 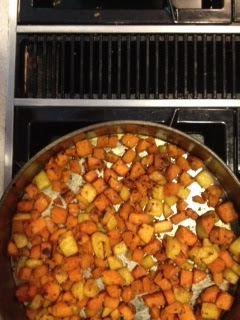 Toss all ingredients together until oil and spices are evenly distributed over the potatoes. Spread diced potatoes evenly in an oven pan. Bake at 400 degrees for 20 minutes. Then, turn oven on broil, tossing mixture when potatoes start to become dark brown around the edges (you'll have to keep an eye on them for this). After 15 minutes, test a potato piece to see whether they're soft and fully cooked.  Enjoy, hot or cold!
Posted by Madeleine at 3:14 PM 1 comment: 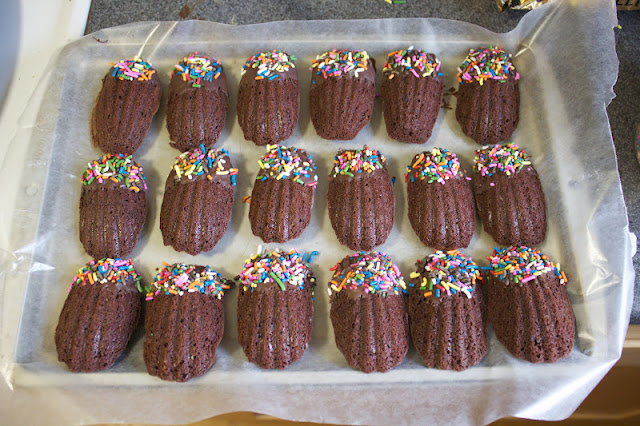 Hey there!  I have been away for so long ... still cooking, albeit probably not quite as much as I was a few months ago.  Then, I sorta kinda lost my tiny little camera for a while ... it is pretty tiny.  But then, hurray!  It turned up yesterday buried in some luggage I hadn't used for months.  So - hopefully - I'm back!  :)

I wanted to share some fun little cookies I made for my friend Christina's birthday last month.  My mom got me a madeleine pan for Christmas a while back, which is what produced these pretty shell-like shapes.

These cookies were so easy, because I just used a brownie mix to make them.  It was a Ghiradelli brownie mix that called for 1 egg.  I used 2 eggs instead to make the final product a little fluffier than a chewy brownie would be ... these came out to have a consistency somewhere between a chewy brownie and a fluffier chocolate cake, which was just what I was going for.

I laid out some wax paper over a cookie sheet, then melted some semi-sweet Ghiradelli chocolate chips in a bowl.  Some fancier folks than I might do this in a double boiler, but I just use the microwave.  It works perfectly fine, although you do want to be sure to stop the microwave and stir the melting chocolate every 20 seconds or so, to make sure it doesn't burn.

I also chopped up some dried apricots (see below) and had those on hand, along with some colorful sprinkles.  The tiny apricots because this was an event for a very sophisticated urban dweller, don't you know, but the sprinkles were befitting a birthday party attended by the quirky, at times whimsical crowd that we are.  So we had both.

The outline of the shell at the wider end of the madeleine mold is so pretty, so we dipped the plainer, small end of the cookie in the melted chocolate.  Then just gently roll the chocolate-covered cookie in sprinkles or apricots, and place on the wax paper.  Alternatively, you could sprinkle the apricots or sprinkles on the wax paper and lay the chocolate-covered cookie on top to cover one side of the cookie, then sprinkle the tops.  That way may be a bit faster.

After the sheet is full of cookies, you can put it in the refrigerator for at least 10-15 minutes to help the chocolate to set.

These were pretty, and fun, and yummy, and I would absolutely do them again! 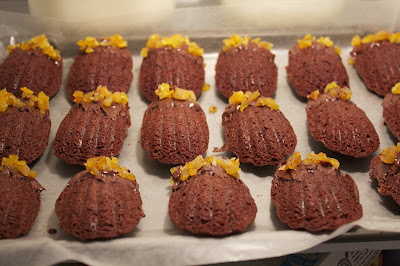 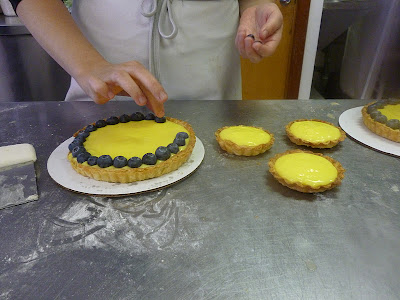 That's right: I'm in a baking class.  It's super fun.  I've been waiting to sign up for one of these since the summer when I was in the thick of my dissertation and had absolutely no business even thinking about signing up for a baking class.

Turns out, getting into baking class isn't easy.  This school is so popular, you've got to sign up even months in advance to get a spot - at least, if you can't go to any of the classes given on weekday mornings and need to hold out for an evening or weekend one.

I really like baking class.  The first week we learned to make cream puffs.  One of the students in my class made these gorgeous cream puff swans.  You can see the cream puffs I made in the back.  They're the round ones with white icing drizzled over the top.  That's amaretto icing, by the way.

The next week we made tarts and pies.  These lemon curd tartlets were what appealed to me.  Here's some of what I learned. 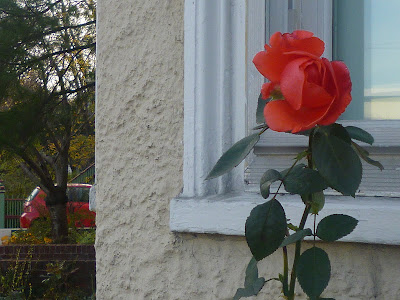 What??  What is this guy doing out in the middle of November - and in New England, no less??  What's going on?

Spotted last Saturday on my way home from baking class, where I mixed, kneaded, and baked bread for the first time ever.

More on baking class soon.  In the meantime,

Dear friends, It has been a LONG time.  More than two months, in fact.  The Kitchen in the Yard has been on a rather extended vacation while I finished my degree and started new work this fall.

So, yes!  That means I am a doctor now!  A research doctor - not the medical kind, mind you.

All the foodie-ness of this blog has been a saving grace for the past 10 1/2 months since I started posting, and perhaps especially during major crunch times with my dissertation since about April (e.g., when I was really tired, there were times I would tell myself: "As soon as you complete X part of this article, you can edit some photos and write a post!).  I did, in fact, finish the entire dissertation in that time and submitted the final version in early October.  Then all manner of life kicked in and it was time to start new work (more research training), buy a car (I haven't owned a car for almost 8 years!), and get used to many new routines.

But now it's time for us to catch up.

In my memories of these very recent past few months, working on the dissertation definitely dominates.  However, other things happened, too.  Here are some of the highlights of the past few months since my last post. 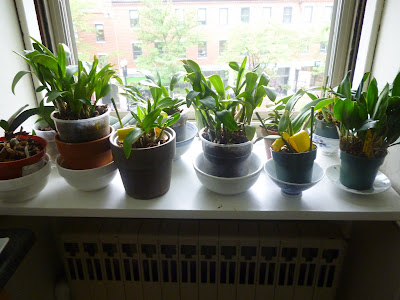 Babysitting my friend Megan's orchids while she was between apartments early this past summer.  Having these around was so great, it tempted me to get some of my own.  But let's face it; my track record with plants is absolutely terrible, and that's why I no longer have any in my home - they have all gone to a better place.  Good thing Megan found a suitable home for herself and these, and took them back before too long. 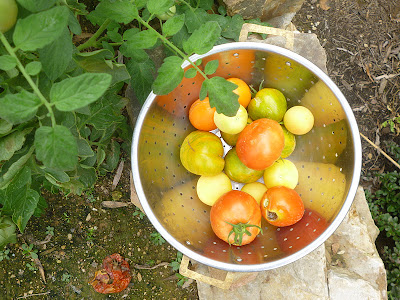 Picking tomatoes in my aunt's garden in Lancaster, PA in August.  Gorgeous, aren't they?  These are all different types of tomatoes! 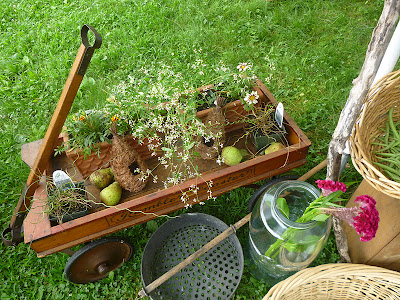 Stopping by random farm stands in Lancaster County, where lovely blooms, fresh vegetables, and home-baked treats were being sold by a rather eccentric city lady newly relocated to the country.  I love characters like these, and the tarts she'd baked were delicious! 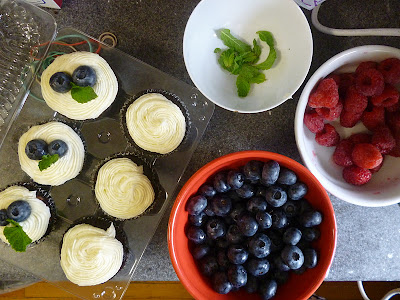 Baking the wedding cupcakes for my dear friends Anna and Willie, who got married in August.