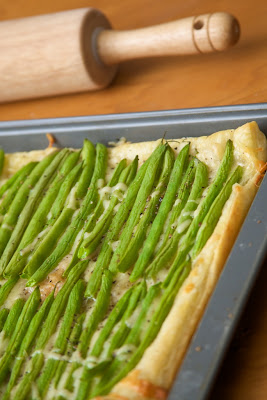 On to the savory tart ...(by the way, kudos to my friend Sarah for styling this first photo with the rolling pin - a gift from my cousin Kate - that I used to roll out the pastry!).

Oh, Seasonal Vegetables
I made a version of this with broccoli florets earlier in the winter and it got rave reviews from friends, so of course I had to make it again.  There are basically 3 essentials.  First, puff pastry, which you can make yourself, or do what I did and buy it in the frozen food section of your local grocery store.  I'm very, very into pastry and I don't think I could have done a better job than the people at Pepperidge Farm with this one.  Second, some good cheese.  Third, whatever seasonal vegetable you feel like eating.  I'm a grad student, so for me whatever vegetable is cheapest often also seems to be the most appetizing.  Earlier in the winter broccoli was among the least expensive vegetables in the produce section; this time around green beans were on special so there it was.

Choosing the Right Cheese
I think with a fairly mild-tasting vegetable like green beans, it's key to use a cheese with at least a little bit of a kick ... here I used the sharpest cheddar I could find, and then sprinkled some parmesan on top of that for a little more flavor.  You won't go wrong if you mix two or even three cheeses together.  I think romano would also be a great cheese for this.  I'd avoid milder cheddar or havarti, that sort of thing.

The assembly is pretty easy: bake up the puff pastry according to the instructions on the package, first.  Grate the cheese and pop the stems off of the green beans, set them all aside.  Have some salt and pepper handy, preferably sea salt and peppercorns that you can grind right on to the tart after you've assembled it.

Is Any Recipe Complete Without a Secret Ingredient?
Now here is one secret ingredient that I didn't mention earlier: the garlic butter.  Friends, you will not be sorry if you take the time to do this next step, even though you can't see the results in these photos. 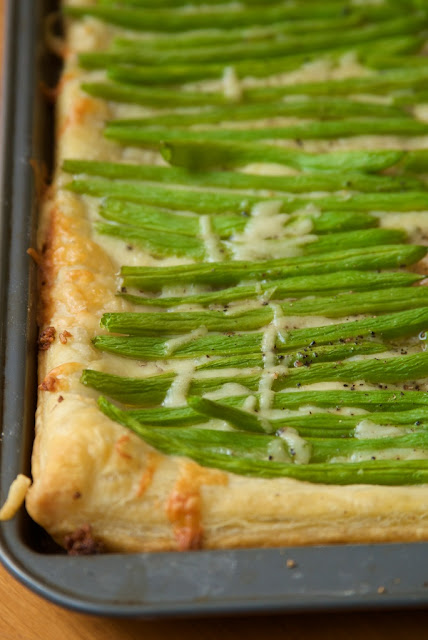 I pressed, minced, and crushed about 3 cloves of garlic and added it to 2 tablespoons of melted butter in a small dish.  Then I brushed the pre-baked puff pastry with it before adding the cheese or green beans.  Ideally I would use a pastry brush for this; I didn't have one at the time so I just used a spoon and did my best to distribute the garlic butter evenly over the pastry.

Putting It All Together
After that, I spread the grated cheese over the pastry, leaving just the edges to bake up plain, like you can see in the photo, and saved just a little bit of parmesan to sprinkle on top of the beans.  Next, I arranged the beans horizontally in two columns across the pastry.  I find this kind of assembly fun, actually; it's so orderly, doesn't take long, and looks beautiful when it's done.  After the beans were all in order, I drizzled about 1-2 tablespoons of olive oil over the beans, lengthwise down the pan.  You can do this pretty sparingly; it's not like we don't already have pastry, butter, and cheese in this thing.  Not that there's anything wrong with that.

The finishing touches: I sprinkled the little bit of remaining cheese over the beans - but just a tiny bit to add some texture to the top, nothing that will distract from the overall look of the beans in their rows.  Then I ground sea salt (just a little) over the beans, and did the same with the pepper.  I put the whole thing back in the oven and cooked it for about 15-20 minutes at 375 degrees ... you want the cheese to be melted and the beans to be softened but still crispy.  And you also want the pastry to be a lovely shade of golden brown.  So we can't take the pastry out before that's all the case.  I was reaching over my friends Sarah and Jared multiple times to open and shut the oven to check on this, while they were doing all manner of soup-stirring, cheese-grating, and dish-washing while I rushed around my place trying to tidy up before the rest of our neighborhood group arrived for dinner.  (If we all had friends like these, our collective weltschmerz would be lessened considerably).

Beautiful, Beautiful
My friend Dan Nystedt took this photo, as he did the others posted, and I love how he captured that bit of glistening black pepper on top of the green beans, and the slight, slight wrinkling of the green beans after they'd been in the oven.  The little bit of olive oil brushed over the top helps that to happen; the flavors to soak together and the beans to soften.

If any of you try this with other vegetables or cheeses, tell me if you happen upon any amazing combinations!
Posted by Madeleine at 11:49 PM