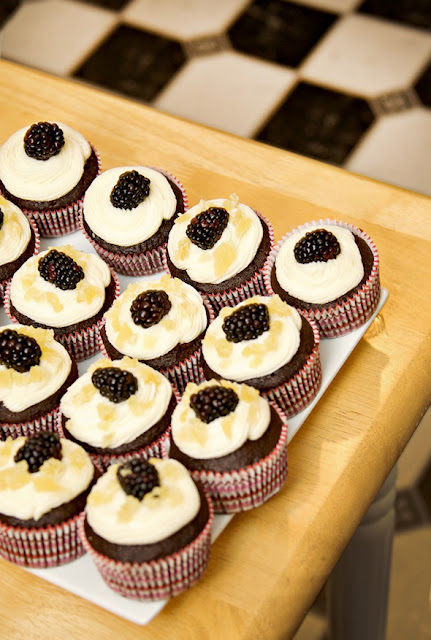 The ones you see in this photo are actually a twist on the ones from a posting of chocolate cupcakes from a few weeks ago, even though those three in the top row look just the same on the outside.  The chocolate cupcakes are from the same Martha Stewart recipe as in the other posts.  And yes, there are also blackberries on these, just like before.

However, there are two new things here.  One, I diced up some candied ginger and sprinkled it around the blackberry.  I think this combination worked really well for these reasons:

This is something I started thinking about a while ago ... when do you ever get to eat fresh berries with buttercream?  Basically never, right?  It seems like berries tend to get paired with lighter cakes, whipped cream, or else put in tarts and pies.   Which, of course, are also delicious.  But the combination of the buttercream and berries really worked ... I think it's that concept of having something light and fresh cut through the rich, dense feel and flavor of the cake and buttercream.  And the ginger just brought out new flavors, too.  I really, really like the combination of flavors here.

Okay, the second new thing, which you can't see, is that these chocolate cupcakes are filled with whipped chocolate ganache - the same stuff swirled on top of the previous posting's cupcakes as a frosting.  Think: Hostess Cupcake ... only more super duper.  And while I'm not going to take the time to write about this right now, all those nasty yet amazing Hostess cupcakes I ate in junior high and then didn't touch again until a few months ago - on a strange and weird whim of sorts, but I'll get to that another time - really have proved inspirational recently, what with all of these posts on cupcakes and frosting and filling and blah blah blah.

Anyway ... filling the cupcakes adds another step of preparation, and therefore time, but it's not difficult.  I just fitted a pastry bag with a tip that had the largest opening I could find, then I stuck the tip into the top of the cupcake and squeezed the ganache into the cupcake.  The cake is light enough that it expands to fit the ganache; no need to cut out a part of the cupcake to make room.  The top will look a little messy, but you cover it with the frosting so no one is any the wiser ... except all of you reading this since I just spilled the beans.  Smile.  Just the way you serve them up.
Posted by Madeleine at 6:14 PM