How to Halve and Pit Cherries, in inventive urban kitchen fashion

Cherries are in season, and I've had a hankering for cherry tarts for a while now.

I think it's something to do with my oft-resurfacing desire for the currant pies and tarts of my adolescence in Eastern Europe, and I can never find those in this country.  Cherries are kind of similar in flavor ... not to knock fresh American cherries, which are, of course, delicious in their own right. 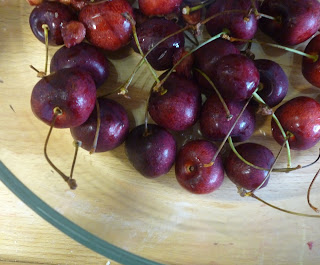 Anyway, I found myself with all this going on inside, plus a big sieve full of cherries in my refrigerator today, and I decided it was time.

Yet a problem arose, a problem I have fairly often, and that is that I had this food in mind to make, but realized that I didn't really have all the kitchen tools to use that would make creating the food the most straightforward process.  I credit this to the rather haphazard way that my kitchen has been stocked.  Basically, when I'm going to make something new, I a) buy the materials I need and add them to my stockpile, as long as said materials aren't too hefty for my graduate student budget, b) improvise with what I have if I can research or invent an alternative solution (which has produced knowledge about a host of foods in the pantry that could be used as pastry weights, for example), or c) make something else if options a) and b) aren't feasible.

I know you can get an actual cherry-pitting device which seems to make doing the task super easy.  But do you think I have that very specific device for a fruit that's only in season for barely a few weeks every year?  Of course not.

So I set to my first-stop research method: googling, then watching the most sensible-seeming youtube videos that come up.  This narrative-style version from a cook facing a similar problem was pretty good, and so was the one from Whole Foods chronicling four ways to pit a cherry.  Both of them demonstrated a method using a paper clip, which seemed pretty crafty.  But alas, I have hardly any office-style stuff at home, and didn't  even manage to turn up a paper clip in my quick poking about my apartment.  While I did have a knife, of course, that always ended up mangling one half of the cherry and I wanted the cherries for my tarts halved, but with their rounded shapes intact, looking pretty.

Necessity is the mother of invention, as we know, and that's when I took a look at the tiny 1/4 tsp. measuring spoon I'd been using to make wedding cupcakes this past weekend.  (Yes!  Wedding cupcakes!  But more on that later).

PERFECT!  The tiny scoop was perfect for a cherry pit, and did a beautiful job producing two plump, juicy cherry halves that were nearly as pretty as the whole cherry had been on the stem.

Here's how it went: 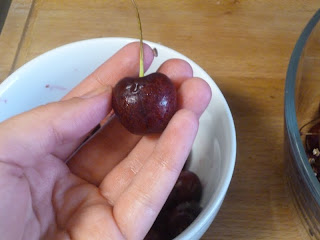 I took my first cherry and admired it for just a sec.  Because it was very lovely.  (Smile).

Then I removed the stem. 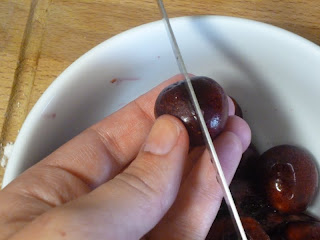 With a paring knife (or some other small but sharp knife.  Confession: the one I'm using here is actually a steak knife), I sliced length-wise around the cherry, starting where I had just removed the stem. 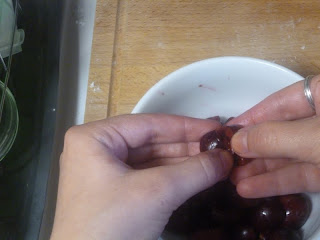 With my thumbs, I pulled the halves apart, using a slight twisting motion when necessary.  One half was pitted, then, and the other half contained the pit. 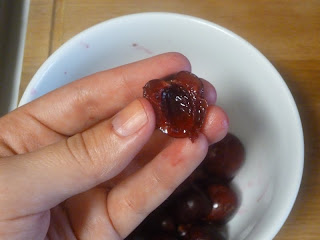 Here's that first pitted half.  Not bad, huh? 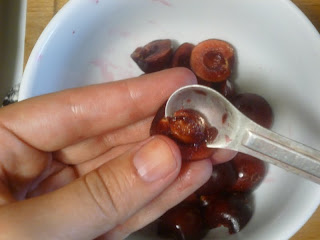 With my 1/4 tsp. measuring spoon, I angled around the pit and scooped it out of the cherry flesh. 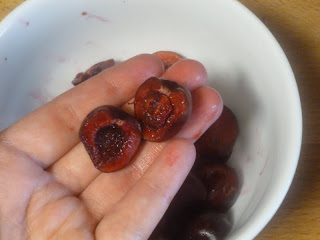 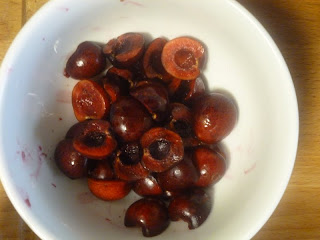 And a growing bowlful, almost ready for tarts.  Yes.

Posted by Madeleine at 5:30 PM