Letters from Maine on Independence Day Weekend (and Baking and Boiling, Etc.)

I went to Maine for my 4th of July vacation.  It was great.  It was a long-ish road from Cambridge to Port Clyde, but of course, it's all okay when the company's good.  Which it was.

Hurry up, traffic and traffic lights; we're trying to be on vacation here. 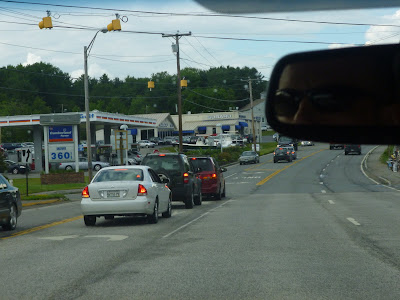 When I saw the sky looking like this over the bridge on the edge of Wiscasset, I was pretty sure I was on the right road, heading in the right direction.  Away from the city, basically.  And especially - away from my office.  It was time for a change of scene. 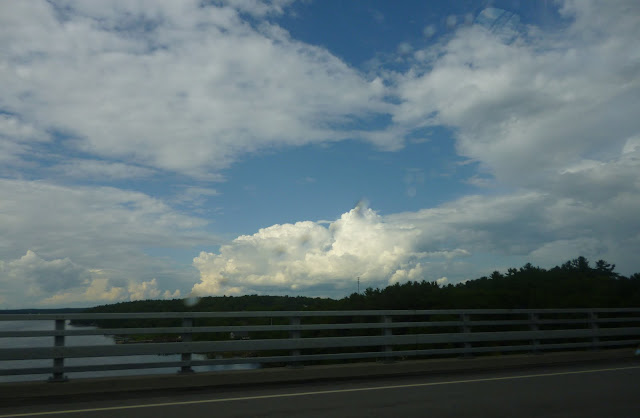 Within about 15 minutes of arriving to the cottage in Maine - and that includes the time it took to unload our stuff from the car - I was browning butter for this banana-strawberry bread I read about on the Joy the Baker blog a few weeks ago.

Around the time I was mixing the browned butter with the yogurt and eggs and whatnot, I thought about adding a light crumb crust to the top before putting those sliced strawberries where they are and popping the whole thing into the oven.  And so that's what I did.  (3 Tbsp. cold butter, 1/4 c. four, 1/3 c. brown sugar, all crumbled up and sprinkled on top of the bread batter).  It made those strawberries deliciously sweet and crunchy.  I'd add even more strawberries and crumb crust next time. 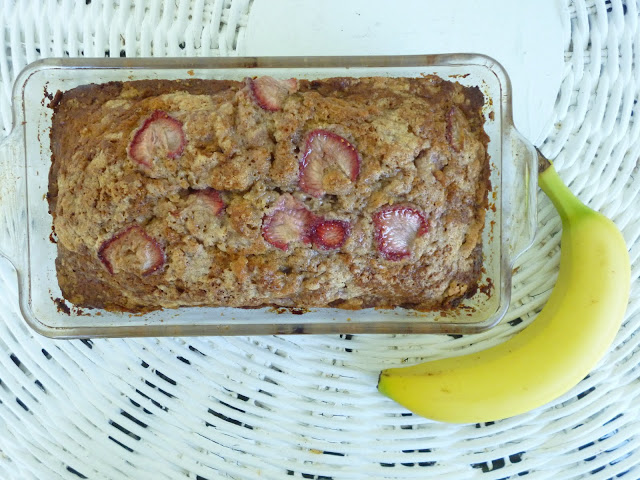 Then what?  Oh yes, then it was time to eat a lobster roll and fries on the dock at the Dip Net (restaurant)/Port Clyde General Store.  And also these delicious mashed potatoes with corn in them, which I sampled from Eliza's plate.  And to meet up with Jerome and Lindsay and baby Logan, who drove all the way from Montreal to spend the weekend with us. 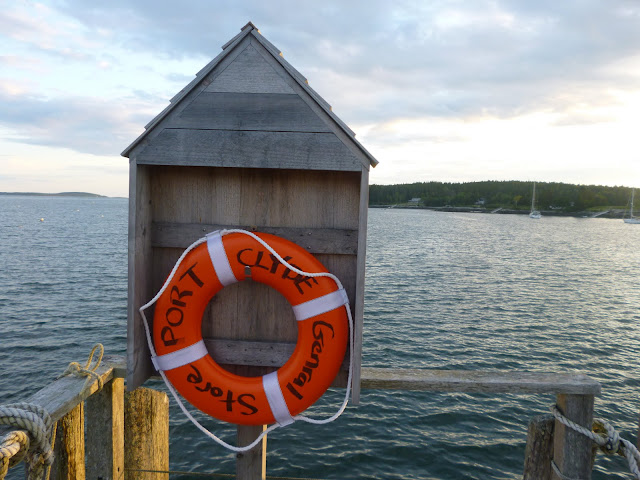 The next day I ate a big fat slice of that banana-strawberry bread and some fruit salad for breakfast, while chillin' with Lindsey and Eliza and cute toddler Logan.  Meanwhile, Jerome made chocolate mousse and gave me some tips in case I summon my courage to try it myself at some point.  Which I hope to do before too long.

The strawberry-banana bread and fruit salad both contributed to the feast that came later that afternoon, since Lindsey and Jerome had brought cheese from Montreal and had been up early making this quinoa salad with tomatoes and cucumbers, and this chickpea salad with feta.  Quite delicious. 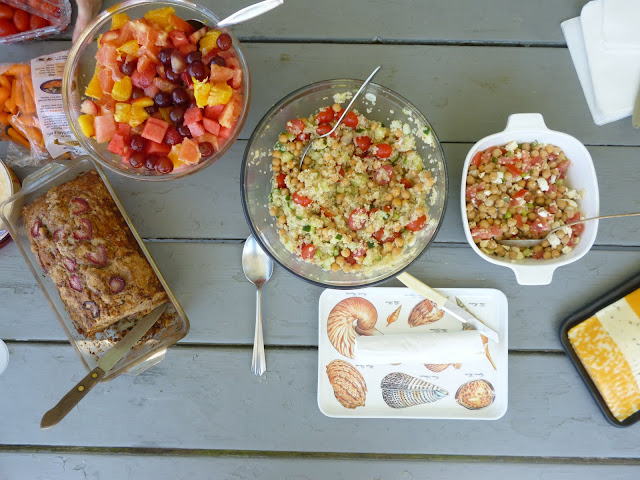 But the day was only halfway over, friend.  And it wasn't long before prep started for this Buford Boil, courtesy of Dan.

... It's okay, none of the rest of us knew what a Buford boil was, either.  Dan says it's "shrimp, sausage, potatoes and corn, boiled in beer, garlic, onions and lemons, to be eaten outside, strictly with hands, on a picnic table or spread out on newspapers, (accompanied by fresh beer)".  Got it.  Yep - that's pretty much how it went.  With a few added details.

One was that, in an uncharacteristically corny moment, the chef, while boiling all of these things in a big pot with a lid on top, put his ear close to the side of the pot and asked me to join him in listening for whether or not it was boiling yet.  Because, a watched pot never boils, but who knows about a listened to pot?  Who knows?  Do you? 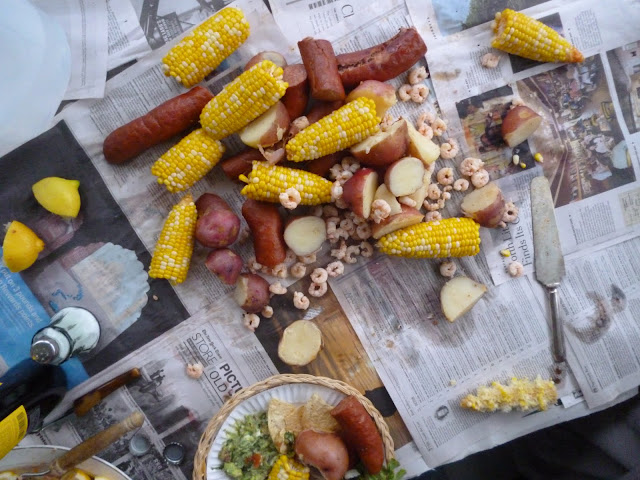 Man oh man, was I bummed I had to leave a day early.  But I guess you've got to do what you've got to do.  Especially when you want to graduate in the near future.  Which I do.  I'm also bummed I can't include a photo of Jerome's chocolate mousse, which we ate for dessert after the Buford boil.  But, it was late and dark by the time we ate it, and I'm afraid my little camera just couldn't handle it.  But I'm going to try to make some myself sometime soon, so maybe there will be another chance.

Thank you coastal Maine for being beautiful and quiet and a little bit rustic and small town-y, and for having cool breezes in July and lightning sunsets and night skies so clear I feel like I could grab hold of a star from my seat on the lawn; and thank you friends for being awesome cooks and laughers and storytellers, and just in general; and thank you Craig for hosting us and for the gorgeous landscape of the family house, and thank you Eliza for the invitation and your fun and your hospitality!  Can't wait for the next time.  Let me know what ingredients to bring. 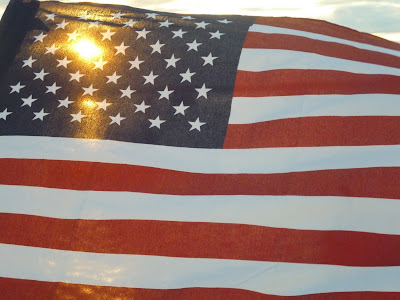 Posted by Madeleine at 6:58 PM