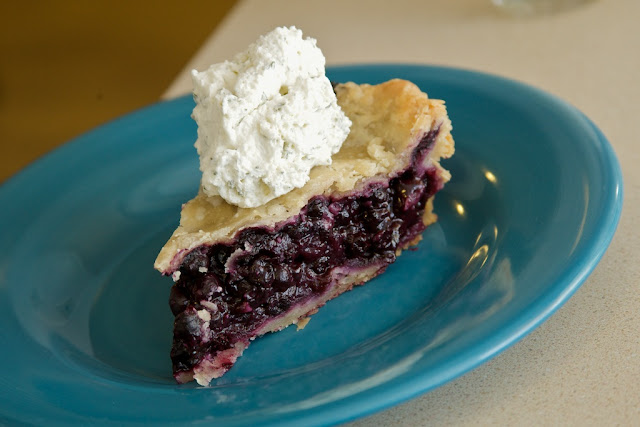 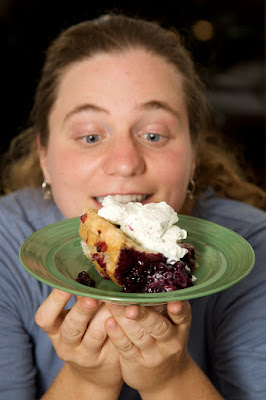 Thank you, Dan Nystedt, for the blueberries for this pie, as well as the beeeau-tiful photos.  I should have more photographer friends.  Dan and Harriet (from the right-side photo) are friends from my church neighborhood group.  One week recently Dan mentioned that he had a big bunch of blueberries hiding in his freezer, just picked this summer near his parents' place in NH.  This little factoid stayed in my mind and kept popping up while I was attempting to prepare for a conference presentation ... I could see the pie coming together in a golden brown, buttery crust.  Then, the revelation of whipping up fresh mint cream as a garnish.  Next step: adding a few spices and some lemon zest and baking up, mere days after getting back from the conference in Canada.

I want to try this pie again, but I'm a little worried about using the blueberries from the grocery store after getting to use these amazing wild blueberries.

I will say that another thing I thought was fabulous about this pie was the addition of lemon zest and cinnamon (I used Elise Bauer's recipe for the filling).  You couldn't identify either of these ingredients in the pie, but they gave the berries a bright flavor.

About the mint cream: I minced some mint leaves very finely (see the tiny flecks of mint in the cream in the top photo), added them to a small carton of whipping cream along with about 2 tablespoons of sugar, and whipped it up with an electric hand mixer.  The cream already has a natural sweetness to it, so I try to add a minimal amount of sugar so it doesn't crowd out the rich flavor of the cream and the freshness of the mint.
Posted by Madeleine at 4:03 PM