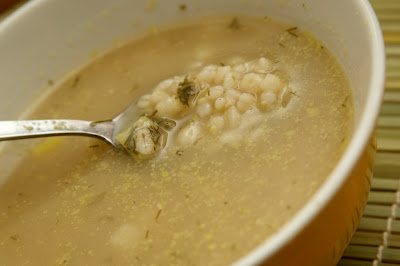 This is the soup that came to me in a revelation during the sermon at church the week before Christmas (apparently I was saying this a lot, because I heard one of the friends who came for dinner the night I served this say to another, "She loves to say that!").  There I was, sitting in the church pew on Sunday evening with Sarah, Dan, and Jared, when I started thinking about how warm and home-ey some barley soup would be ... first, when do I ever get to eat barley?  Hardly ever.  It may or may not be a so-called superfood like quinoa, but it's still fantastically nutritious, hearty, and the chewy, nutty flavor and texture are pretty unique and delicious. 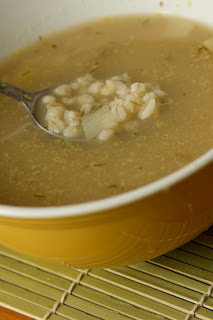 I could cook the barley in vegetable broth, then slice leeks into wide chunks (see the translucent slice in the left photo), and sautee them just briefly in a tablespoon of olive oil before adding them to the broth and barley.  Then I could add lots of fresh dill, a pinch of pepper, a dash of nutmeg, some grated parmesan, and voila; there you have it.  Taste-tested and approved by Dan T on Monday night, and the rest consumed by the neighborhood group on Tuesday night. Some of us sprinkled a little more grated parmesan on top after we'd ladled the soup into the bowls.  Next up: the other parts of the menu from the same night.  Stay tuned.

P.S. Note the sushi mat being used as a placemat for the soup ... this was a fantastic Christmas gift from one of my freshmen students. I've never made sushi before and honestly, it sounds a little intimidating right now, but all I need now is knowledge to add to my tools and sushi may be posted on this site yet.
Posted by Madeleine at 2:48 PM